Den-O can turn into different forms when possessed by different Imagins.

All forms has the DenGasher hoisted on the belt. It is a four-pieces equipment that can be combined into different weapon modes depending on the form Den-O has taken.

The Den-O Rider Belt uses a "Contactless Smart Card" system. Den-O change forms by pressing one of the four buttons on the belt, then swipe the Rider Pass over of the Den-O Belt Buckle. The summoned Imagin will be in control of Den-O instead of Ryoutarou.

When performing the finisher, Den-O swipe the Rider Pass over of the Den-O Belt Buckle, charging up the Rider and his weapons with energy.

Plat Form is basic form of Den-O, all other forms form on top of it. It is used when Ryoutarou henshin without summoning any of the Imagins

Sword form is the main form of Den-O. 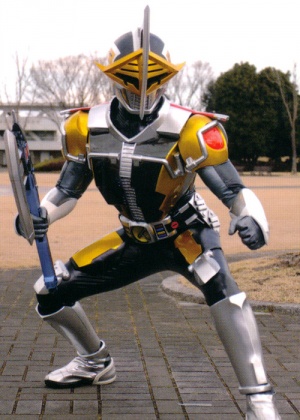 Wing Form is a special form of Den-O. It uses a special golden Wing Buckle instead of the standard Den-O buckle to henshin. Seig, being born together with his contract holder's son in 2007, is different from other Imagins that came from the future. He is able to possess Ryoutarou despite he already has another contract holder and has no relation to Ryoutarou.

Super forms are the strongest forms of Den-O. The K-Taros cellphone is required for accessing these forms, it is to be attached on top of the Den-O Belt buckle.

A super form that involves all of Ryoutarou's four Imagins. It can only be accessed when the four Imagins are in sync and are able to work together as one, which is difficult at first since they have been bickering with each other ever since they met. When the number 3-6-9-# is dialed from the K-Taros cellphone, all the four Imagins can possess Den-O at the same time. Momotaros is mainly in charge, but the other Imagins are in control of their respective limb and are able to take control over the whole body when needed.

The finisher is activated by pressing the "Charge and Up" button on the K-Taros cellphone and then swipe the Rider Pass over of the cellphone belt buckle.

Due to the Imagins losing the ability to possess Ryoutarou when they reach the past, Den-O is unable to change into fighting forms. As a result, the Imagins created the DenKamen Sword so Ryoutarou is able to continue the fight alone. The sword allows Ryoutarou to tap into the Imagins' power despite not being possessed. In Plat Form, Ryoutarou can summon the DenKamen Sword by attaching the K-Taros cellphone onto the Den-O belt. And by putting the Rider Pass into the slot at the back of the sword, he can henshin into Liner Form.

Densha Giri (Densha = Train, Giri = Slash) is activated by first pulling the lever on DenKamen Sword to go through all four sword modes, then push the level in. The sword will then generate an aura train tracks. Den-O can jump on the tracks and slide straight to the enemy similar to when a train runs on tracks. The finishing attack depends on the final mode selected on the sword.

DenLiner is a bullet train that travels through time. A person in the real world can enter DenLiner's train station by holding DenLiner's pass or ticket and open any door when the time of hour, minute and second lines up (eg. 03:03:03 or 10:10:10). DenLiner is mostly white in color and is made up of eight cars, the first four cars being Sword Form's DenLiner Gouka, the rest are the cafeteria and living quarters. The Imagins often mentioned the train contains a bath, though is was never shown on screen. The train's control panel, the DenBird motorbike, is located inside the locomotive.

DenLiner is crucial to Den-O when fighting the Imagins. When the Imagin fly to the past, Den-O can give chase by putting that Imagins's ticket in the Rider Pass and then by inserting the pass into the DenBird, DenLiner can take Den-O into that specific time destination in the past. When the Imagins go out of control and become giant monsters, Den-O will also use the DenLiner to battle these monsters.

The DenLiner crew consists of Owner, Naomi and Hana. The Imagins stay on the train when they are not possessing Ryoutarou. The Imagins have a physical body while on the train compare to sandy form they have in the real world.

DenLiner Gouka (デンライナー ゴウカ Denrainā Gōka) has two large red peach-like "eyes" as the train's windscreen. The train's outlook and weapons design are based on Den-O Sword Form, which in turn is based on the Japanese Momotarō legend. It forms the first four cars of DenLiner. During battle, as shown in Episode 2, Gouka separates itself from the other train cars so as not to endanger the train's passengers.

Each train car contains a different weapon. The first car contains the GouCannon (ゴウカノン) which is a four-barreled laser cannon. The second car houses the Doggy Launcher (ドギーランチャー), it's shaped like a large dog head and can shoot rockets from its mouth. The third car contains the Monkey Bomber (モンキーボマー) which is able to haul large red bombs at the enemy, two bombs at a time. The fourth car is equipped with the Birdie Missile (バーディーミサイル). The missile launcher is shaped like the "tail" of the train and is able to fire bird-like missiles.

DenLiner Isurugi (デンライナー イスルギ Denrainā Isurugi) is Rod Form's train. It can release a turtle-shaped, high-speed hovercraft from its back that can travel on water or fly in the air. Isurugi consists of one train car that can link up with DenLiner Gouka, with Isurugi acting as the locomotive and Den-O is able to control both trains with the DenBird. In this linked-up form, Isurugi can utilize Gouka's four weapons in battle. Isurugi itself can also generate two large beam swords that can cut through the enemy.

DenLiner Rekkou (デンライナー レッコウ Denrainā Rekkou) is Ax Form's train. It is made up of only one car, but the DenLiner Gouka can link up from behind to form a larger train. In battle, five axes appear from the side of Rekkou (three on the left and two on the right, making it looks like an insect) and a large blade is also equipped on its head. The train is built for close combat, but it can link up with DenLiner Gouka for long range weaponry. Rekkou is able to "climb" on its enemy and attack with its axes "legs". For the finishing attack, it'll power up its large blade on its head and cut the enemy in half.

DenLiner Ikazuchi (デンライナー イカヅチ Denrainā Ikatsuchi) is Gun Form's train. It is made up of two cars. Ryuutaros, being the most powerful of the four Imagins, is able to link up Ikazuchi with all the other three trains. With Ikazuchi's first car in the lead, then Rekkou, Isurugi, Gouka and Ikazuchi's second car in the rear. Den-O does not control the train from inside the locomotive. Instead, he docks the DenBird on top of the first car and take control from the outside. In battle, Ikazuchi's first car will become a dragon head while its second car in the rear will become a dragon tail, with all the other trains in the middle activating their respective weapons. The train will become a long dragon. The Ikazuchi dragon is able to fire a powerful laser beam from its mouth to destroy the enemy.

DenBird is a motorcycle and the main control panel of DenLiner. It is located inside the locomotive. When a pass (with a ticket inside) is inserted into the DenBird, the DenLiner can go to that time destination specified by the ticket. There was once that DenBird was taken away by New Den-O, so Owner replace it temporary with a bicycle in order to move the train. Den-O sometimes ride the bike in the real world as a means of transportation.