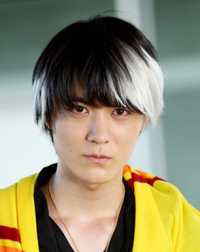 Hanaya Taiga was once employed by Seito University's CR department, but he was let go after his negligence due to obsession with gaming led to the death of one of the patients in his care.

Due to his obsession with gaming, Taiga maintains a one-track mind and can't help but seeing everything as if it is a game. He seeks the Gashats so that he can master each and every game and will do whatever he can to obtain them. Besides Emu, he seems the most proficient at gaming and it's conventions.


Modeled after a shooting game called BANG BANG SHOOTING, Snipe is armed with a variety of guns.

In his level 1 form, Snipe is able to fire his own body as a missile towards any target in his immediate path, though he admits this attack causes extensive recoil.

Like most of the Riders, Snipe possesses a humanoid Level 2 form that is better equipped to deal with fast-moving opponents.