A series regular on Kamen Rider Wizard. He plays the second Rider.

His main saying is "A pinch is a chance". Matching with his happy-go-lucky lifestyle, he sees desperate situations as opportunities.

He also has a habit of interrupting people and saying "Say no more!"

Seems to have a positive personality. His catchphrase seems to be "A pinch is a chance." He also appears to take eating/meals really seriously (Perhaps since his human form is a sort of drifter/bum character).

Apparently really likes mayonnaise since he carries a bottle of it around with him. Will even put it on doughnuts.

Because of his obsession with mayonnaise, Haruto and Shunpei nickname him "Mayonnaise".

Grew up in a rich family. Has a strict grandmother that he doesn't see eye-to-eye with. He decided to become an archaeologist because he found a fossil as a child and thought it was cool.

介 - Shellfish, mediate, concern with oneself 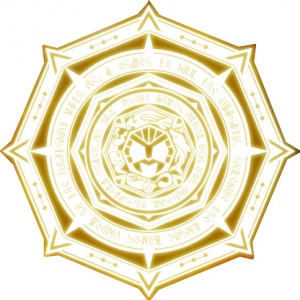 Phantoms refer to Beast as the Primordial Mage (Inishie no Mahoutsukai)

Belt: Beast Driver. Activated with the Driver On Ring and Beast Ring.

When Beast inserts one of the mantle rings into the Dice Saber, it will roll the die on the saber. The number it stops on will summon that number of mantle animals at the opponent. Only Falco has been used so far.

Mirage Magnum - Primary weapon of Kamen Rider Beast Hyper but can be used outside of the form.

When Beast opens up the Hyper Ring and inserts it in the Magnmu, it powers the gun and shoots an energy form of Khimeria out of it to destroy the enemy and allows Beast to consume it.

Yells out "It's time to feed" at the start of battle.

When he defeats Ghuls and Phantoms, his belt can eat them to absorb their magical energies.

His various rings give him different mantles on the right side.

Beast's rings can used be by Wizard but he is not able to use Wizard's rings due to the shape of his rings.

Was investigating some ruins after college. He stumbled upon a hidden cave. Inside it, he found a slab with the Beast Ring in the middle. The slab turned into a belt. Upon removal, rocks fell from the cave ceiling which turned into Ghuls.

That is when he hears Khimaira's voice. Khimaira explains that by using the belt, they have become one. As a consequence, Khimaira must be fed magical energy, otherwise he drains Kousuke's life energy until he dies.

Wiseman explains that Beast Belt was sealed by the Phantoms and is forbidden.

Gives Beast the power to turn invisible and along with its tongue used to attack enemies at ranged.

Allows Beast to remove poison from himself and other people.

Activated with the Falco Ring ファルコリング on the right side of the Beast Driver. The Belt goes "Falco. Go Fa-fa-fa Falco."

Allows Beast to fly in the air.

Activated with the Buffa Ring バッファリング on the right side of the Beast Driver. While the other animals just lose the last "n" in their name, Buffalo loses the whole "lo" part. The Belt goes "Buffa. Go Bu-bu-bububu Buffa."

Can create shockwaves when he pounds on the ground.

When Nitou was nearly out of energy to live, he plead with Khimeria and succeeded to use the power of the recently disoovered Hyper Ring ハイパーリング and Mirage Magnum. When Nitou inserts the Hyper Ring into the belt, it goes "Hyper. Go Hy-hy-hy Hyper."

The form gives Beast enhanced strength and speed along with using the tassles on his forearms as weapons. He can use Mirage Magnum's finisher in this form by opening up the Hyper Ring.

Appears to be a Phantom with the head of a lion, dolphin, falcon, buffalo, and the tail of a chameleon. He allows Kousuke to become the mage Beast, but must be constantly fed magical energy or Khimaira will feed upon Kousuke's life energy instead.

Khimaira is the Greek pronunciation of chimera.