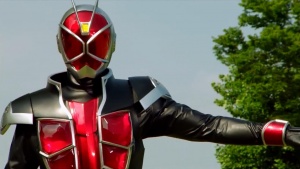 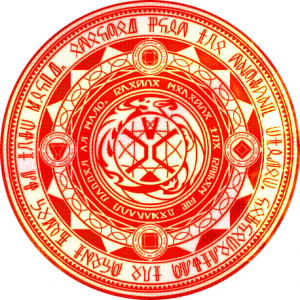 Phantoms refer to him as the Ring Mage (Yubiwa no Mahoutsukai).

A man who can use magic because he didn't give into despair. Has a Phantom in his body.

When he transforms the belt sings "Sha ba do bi Touch Henshin" This is also played for Style Changes.

Belt: The Wizard Driver. When a ring is put upon the hand print on the belt, he transforms into Kamen Rider Wizard. The left hand's transformation ring can be swapped to do four Style Changes.

Bike: Machine Winger. It's Wizard's motorcycle. It also acts as reins for the Wizardragon and becomes an extra skin for its wings when combined.

Weapon: Wizarswordgun. From the name, it can be either a sword or a gun. When Wizard opens the hand on the weapon, it can unleash a finishing attack. The hand can be use with the rings as well such as Copy and Big so the effect would be isolated on the weapon only.

AxCalibur - It's Kamen Rider Wizard Infinity's weapon. Dragon transforms into this weapon and a combination of an axe and sword. When Wizard places his hands next to the hand symbol on the weapon, it Turn On for its finisher.

Other: Drago Timer. It allows Haruto to create clones of the Dragon forms independent of him and be able to become Kamen Rider Wizard All Dragon.

The rings change the mask and the chest portions. He uses magic from each of the Elements. The right hand rings are reserved for casting spells. It works in conjunction with the left transformation rings. He can use them even when not transformed as Wizard, making the story more exciting. Depending on the style, the spell rings are affected by the elemental trait of the style.

Red form. When Haruto transforms into this form, the belt goes "Flame. Please. Hii Hii HiiHiiHii". It's considered to be the base form for Wizard.

Yellow form. When Haruto transforms into this form, the belt goes "Land. Please. Dododo dododon Don Dododon". He possesses greater strength with this form compared to the other forms.

Even though Haruto can travel to the Underworld in this form, he cannot use its power due to Dragon needing to leave him in order to fight the giant Phantoms. When using the Special Ring, Dragon's head materializes in reality to execute the finisher.

ボーボー (Boubou) = The sound of something burning.

When using the Special Ring, Dragon's wings materializes in reality and allows Haruto to fly.

ビュー (Byuu) = The sound of something blowing.

He is able to use all elemental abilities with All Dragon. As a final attack, elemental attacks in the form of dragons attack the enemy while Wizard kicks the enemy.

The song is based from all previous styles' songs except All Dragon.

This form allows Wizard to use all four elements and possesses super speed. Also he wields AxCalibur in this form.

Summoned with the Drago Rise Ring. It is the Phantom that's within Wizard and thus it can be only summoned while in the Underworld. Without Machine Winger, it won't listen to Wizard's commands and needs to be control with Machine Winger. It can shoot fireballs. It does has intelligence which suggests that it did not want to follow Haruto's commands but it allow him to use the Flame Dragon ring to use his power outside of the Underworld.

Finisher: When the Kick Strike Ring is used, Wizard is able to transform the Wizardragon into a giant foot to destroy Phantoms.