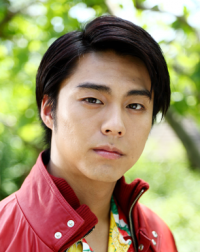 Kujou Kiriya is a coroner who is investigating the Bugster virus.

Kiriya's friend and colleague named Jungo was infected with the Bugster virus during the early days after Zero Day and Kiriya did everything he could to help his friend including obtaining the secret information on Bugsters from the Department of Health. Due to his distress over his illness and general hysteria, Jungo was involved in a car accident that led to his death, making Kiriya even more determined to stop the Bugster virus.

Kiriya acts as a free agent and will work with anybody as long as they further his goals to find out the truth about the Bugster virus and end it's scourge. He also does not believe that honesty is the best policy, considering his friend Jungo's reaction to the news that he had the Bugster virus and he'll therefore often play fast and loose with the facts of any given situation depending on the circumstances.

In his level 1 form, Lazer is able to use the wheels on his arms as weapons.

Unlike most of the Riders, Lazer's Level 2 form is a bike that is able to reach higher speeds with a partner Rider. He usually pairs up with Kamen Rider Ex-Aid for this.

Using the GIRI GIRI CHAMBARA Gashat, Lazer is able to gain a humanoid form that resembles a Samurai. He also gains proper weaponry; a crossbow that can be separated into a pair of sharp tonfa.