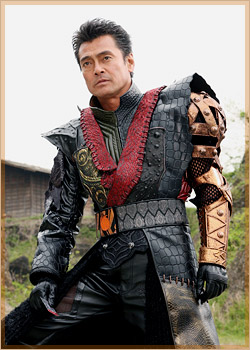 Gaou is the main villian in the movie Ore, Tanjou! of the Kamen Rider Den-O series.

Gaou is the leader of a gang of thieves that targets time-traveling trains. He is tired of time and wish to control the GaohLiner that can erase time. He has the Infinity ticket, but still needs Owner's Master Pass to get to the time where GaohLiner is buried. While Gaoh and his gang of Imagins wait in year 2000, Molech Imagin and Bloodsucker Imagin carry out his plan in year 2007. Molech Imagin's job is the lure Kamen Rider Den-O to the year 2000 while Bloodsucker Imagin distracts Kamen Rider Zeronos. When Den-O chases Molech Imagin in DenLiner to a pier in 8th May 2000, Gaou and his gang are waiting nearby. They hijack DenLiner while Den-O is busy fighting Molech Imagin, trap the Den-O Imagins in a cell, and obtain the Master Pass from Owner.

Gaou arrived in the Edo Era and unearths the GaohLiner. He first plans to erase the day Nogami Ryoutarou was born, thus erasing Ryoutarou's existence. Without the Singular Point, time cannot be restored when Gaou erase them. He is eventually stopped by Den-O and Zeronos.

Gaou seems to be well known among people who time travel, as everyone responds with "Gaou? That Gaou?" upon hearing his name.

As a Rider, his name is spelled in katakana. The difference is probably due to the writer at the last minute realizing that the Gaoh System has an origin that has nothing to do with the character Gaou. So it's just total coincidence that their names are the same.

The Master Pass combined with the Infinity ticket can summon the Gaoh Belt. The belt uses a "Contactless Smart Card" system similar to Den-O. The shape of the belt buckle is a rectangle as oppose to the circle-shaped of the Den-O Belt. When Gaou henshins, he throws the Master Pass into the air, the pass will be surrounded by flames and land on the buckle automatically.

GaohLiner is a train that can control time. It does not change the flow of time, it erases time itself. The train was built by an ancient civilization, but fearing its power, the ancient King sealed it before it has a chance to run. It runs on the God's line, and therefore is refer to as the God's Train. The God's Line is a line that goes much farther than time-traveling trains like DenLiner and ZeroLiner can normally go. On that line, one can go thousands, or even ten of thousands of years into the past. DenLiner can only enter the line with the Master Pass combined with the Infinity ticket, and ZeroLiner literally forces its way onto the line's tracks.

The train is mainly copper orange and black, and has a large alligator head as its first car. The alligator jaws can chomp on anything that stands in its way. The jaws can also shoot a powerful laser beam and the spikes on the back can be fire off as missiles.