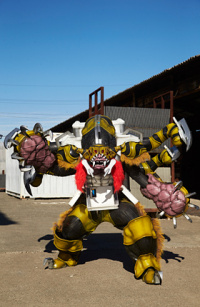 A Nin Shuriken that summons an elephant shaped mecha. "Paon" is the Japanese representation of the sound elephants make when they trumpet.

ShurikenJin combined with Paonmaru. The Paon in the name is a long vowel in this combined form.

ShurikenJin wields two axes in this form and has a giant elephant head for its chest.

Paoon Jet (パオーンジェット！) - An attack where it sprays with the trunk on its chest.

Out of Episode Trivia[edit]