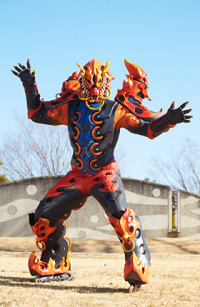 Dokuro is the Japanese word for "skulls", which most of its body is comprised of. In the first episode where it appears, it's summoned using the shuriken dropped by Youkai Kasha. it's unknown if this is where the Gasha part of its name comes from.

Out of Episode Trivia[edit]