Three otaku transform and fight in their delusions. On the surface it's merely a parody, but AkibaRanger is in fact an extended love letter to all things Toku. 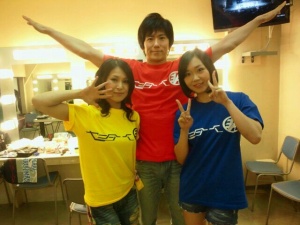 The stunt actors for the AkibaRangers

Played by Uchida Maaya 内田真礼
Is the owner of Sentai Cafe Secret Base 戦隊カフェひみつきち. The joke is Hakase's first and last name can be pronounced as Hakase 博士, which means "Doc, professor".

Played by Aikawa Kozue 愛川こずえ DANCEROID
Works as a maid at the Sentai Cafe. Is seen wearing various Sentai costumes. Her name is a reference to her actress' name, Kozue.

Incorrect popular spelling: Kozkoz. It looks like someone took the spelling of the URL for her picture from the official website and popularized it as Kozkoz. This is a mistake. If for no other reason, the graphics artist who did the picture spells it Kozukozu in that very picture, Kozkoz normally would not be an acceptable spelling for a Japanese name, plus there is a scene in an episode that spells it out. People who spell it as Kozkoz are simply incorrect.

Played by Morita Miiko 森田 美位子
Akagi's love interest. Unfortunately, she barely knows that Akagi is alive. She only addresses him as Pompoko-san, since she only knows him by his profession.

邪団法人ステマ乙 Evil realtors who are trying to turn Akihabara into new Shibuya, a trendy city in Tokyo.

Originally Sutema was used for people who tried pretend to be fans in order to push their goods. But eventually people started calling trolls and people who just talk without paying attention to others Sutema Otsu in the way westerners call people trolls.

Chief of the redevelopment department.

The official material for AkibaRanger spells her name as ©NA, since © is pronounced Maru C in Japanese (Means "Circle C"). Maru+Shii+na = Marushiina. Not much is known about the reasoning for this besides the bad guys having a corporate structure and wanting to include a © sign in her name.

Based on Shachiku which literally means "corporate livestock".
They wear masks that sport the stereotypical salaryman eyeglasses and thick eyebrows while uttering the words, "Noruma" (ノルマ, "Quota"), or, "Zangyou" (ザンギョウ, "Overtime").

Played by Yao Kazuki 矢尾一樹
Looks like a cross between Dr. Shinigami from Kamen Rider and Doctor Man from Choudenshi Bioman. Has a tie that says Sutema Otsu on it. In his introduction, they reverse the joke confusing Z and Otsu's kanji.

Itasshaa - A transforming Itasha. Itasha originally means "Italian car", it got corrupted into ita as in itai/pain since pain somehow got incorporated into otaku culture. Itasha literally means "pain car" and tends to be covered in anime and video game illustrations.

The story of AkibaRanger takes place in what appears to be a parody of the real world. In their world, Super Sentai is also a show and the heroes don't really exist.

There are some fake elements created in this world:

After the show ended, an Internet radio show was started.

In the opening song, the repeated parts like A-a-a Ki-ki-ki and Ba-ba-ba spell out Akiba.

Ending Theme
Tomorrow a Wind Will Blow in Akiba 明日はアキバの風が吹く