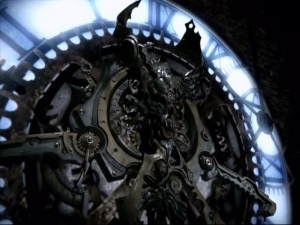 A unique Horror that has no need for a human host, once said to have wiped out an entire village in one night.

Possessing a time-piece, altering it into a variety of forms, Morax lures those driven by time to pick him up.

Once he has a hold on his victim, by after dusk, it dehydrates the victim until only dust remains.