Following the last episode, Hoji begins to enter a stage of depression after making a mistake of allowing the Alienizers to obtain the Wellness Stone, which has the power to destroy a planet. Meanwhile, the other DekaRangers are set on a mission to track Kevakia's real computer to prevent him from leaving his virtual home in cyber space. Hoji is assigned to locate the computer's location on the net. When he finally has the will and confidence to try and locate the computer, Hoji realizes that he made an input error on the computer, which deepens his depression. When Krueger informs Ban that Hoji still hasn't found the location of the computer when the usual Hoji would've located it by now, Ban immediately leaves for DekaBase and begins to attack Hoji for getting so pathetic over one mistake. Ban then claims that he always makes mistakes, which is why he wouldn't understand the feelings of someone who gets depressed all day because of them. This finally awakens Hoji from his depression, as Hoji was able to successfully locate the location of the computer. After Swan digitalized both Hoji and Ban into cyber space, the two begins their battle against Kevakia, making a bet that whoever loses must buy fried beef for three. However, because both of them destroyed Kevakia simultaneously, the episode ends with the two starting an argument over who was the real winner. 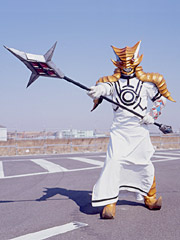