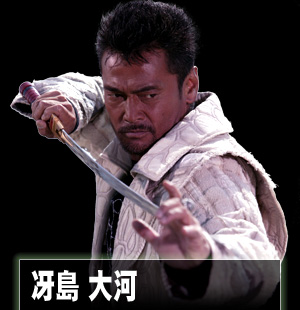 A character on Garo.

Father to Saejima Kouga. Like his son, he held the title of Golden Knight Garo.

Married a Makai Priest named Rin. She died of illness when Kouga was very young, so Taiga raised his son in a very firm but loving way. Kouga was the next in the line of Golden Knights, after all.

Taiga had an apprentice named Barago, who ultimately betrayed the order and became a Dark Knight. In a confrontation with Barago, Taiga is killed, leaving his friend Gonza to raise Kouga.

Looks like Kouga's Garo, with the exception that his eyes are red. Plus he's more likely to wear a mantle.