A Makai Knight in Garo.

Rei is Japanese for Zero, which is his nickname. He covers the Western District while Kouga covers the Eastern one.

A flirt with a goofy personality. He uses this light-hearted facade to compensate for the grim nature of his job as a Makai Knight.

He loves sweets and has a large appetite.

He and his fiance, Shizuka, were raised by a former Makai Knight named Douji. This confused Kouga, since he wasn't able to find Rei's name listed among the registry of Makai Knights. The reason is because Rei was an adopted child.

Shizuka made Rei a dreamcatcher. After her and Douji's death at the hands of a mysterious Makai Knight, Rei put the dreamcatcher into his coat and made it his symbol. He also started calling himself Zero at that point to signify his loss.

He considers himself Saejima Kouga's rival. While their relationship started off tumultuous, they are now good friends. 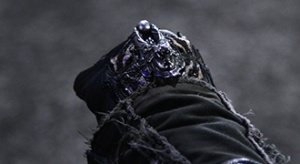 Like Kouga's Zaruba, Silva is Rei's Madou Tool. Forged by Makai Priests, Silva has various abilities which aid in Rei's Horror hunts. She can detect Horrors and act as a communication device with the Watchdogs.

She starts off as a necklace, but at some point Rei puts Silva into his glove.

Rei and Silva often flirt. Silva has a tendency to react jealously when Rei is around other women.

He transforms by drawing two circles which combine to form one circle.

He can attack by combining his two swords. In this combined mode he can toss it like a boomerang.

The fire from his lighter is blue, compared to Kouga's green.

As Zero, he can summon a Makai horse. This allows him to travel to the Makai if needed.