Kiba ~Side Story of the Dark Knight~

呀〈KIBA〉 〜暗黒騎士鎧伝〜 Kiba ~ Ankoku Kishi Gaiden
Note the Gai here uses the kanji for armor 鎧 instead of the normal kanji for "side story".

A side story for Dark Knight Kiba from the Garo Series. Chronologically it occurs during the original series' timeline, but it was released after Garo Movie: ~Red Requiem~ and before Garo ~Makai Senki~.

It uses a mix of real actors and animation segments to tell of Barago's tragic past.

Occurs during the original Garo TV series. The new character introduced in this straight-to-video movie's fate is unknown.

The mention of Ganon, the fang of Messiah, was set up for the second Garo TV series.

Knight of Wind and Clouds Bado[edit] 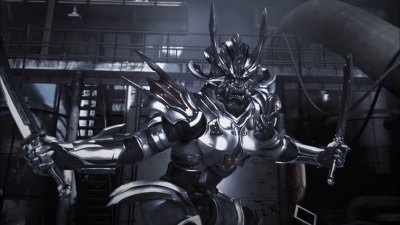 Bado was a Makai Knight who attempted to defeat Barago and set him back on the right path.

Like Suzumura Rei, Bado is a dual-blade user. He also has several unique abilities: