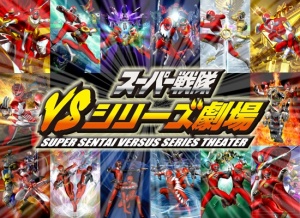 It is a Super Sentai collaboration series.

These versus movies were usually released straight to video or DVD around March. That meant that these stories would come out after one series had ended. They also served as the last big story involving the previous team from last year. The exception to this is LupinRanger VS PatRanger VS KyuuRanger, which had a limited theatrical run from May 3, 2019, but later released on DVD and Blu-ray in August as a V-Cinext film.

This changed in 2009 with Go-Onger. They started airing these movies in theaters in January, making it a Sentai winter movie. That allowed the stories to be seen while the TV show was still airing. The DVD/Blu-ray still was released in March, making the turnaround for these films really fast compared to the summer movies (due to it being released directly to VHS/DVD in March previously being the precedent).

A special event on TV Asahi. It ran from May 23 to December 26, 2010 at 6:30-7:00 and was hosted by the Goseigers. Because of the lengths of these movies, most of them were split up into two parters, with the Goseigers filling in the time with stuff during the introduction and ending segments.

This show is a compilation of 13 Super Sentai V-Cinema in half hour parts.

GekiRanger VS Boukenger was the first in this series to be widescreen. However, it only had a DVD release. So when it aired during VS Theater, it provided an HD raw for the first time, allowing TV-Nihon to release an HD version.

Pages in category "Sentai VS Series"

The following 19 pages are in this category, out of 19 total.