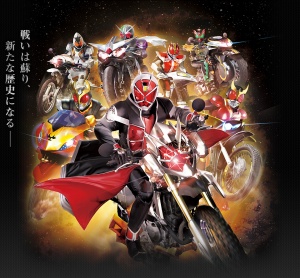 The limited edition version came with like 30 songs from the show that would play during certain times.

※Actors marked with this mean they're not the original actor.

A yellow glowing light with wings. She helps the Kamen Riders through the Birdcage. Her name is the pronunciation for Canary in Japanese.

Both versions of the game include a custom soundtrack feature. It allows you to play songs on your PS3 at certain points in the game.

Going to the Japan PSN store will allow you to download the following: