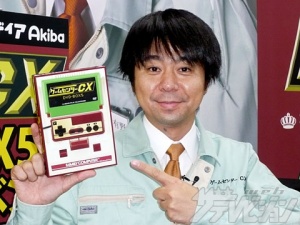 Arino with a DVD box set for GCCX

The show is formatted to be a pseudo company. Arino wears a worker's uniform and has various titles in the show. He even gets "promotions" as the seasons progress.

Initially the program was just Arino interviewing video game company staff. Each episode would focus on a specific company. There would be a small corner where Arino plays a game related to the company, which would later become the main focus of the show.

The Second Season On

After the first season, the focus of the show was shifted to be mainly about Arino's challenges. Each episode would feature Arino playing a game for up to 12ish hours with the goal of clearing it. The new show format also featured other corners that break up the challenge portion.

In the first season, this was one small segment of Arino sampling a game related to the company that he's visiting. Starting with the second season this becomes the main focus on the show.

In the current format, Arino is given a day to clear a game. After which, he is given the choice to give up or continue another day. Some challenges may span multiple episodes.

In this corner, Arino travels to various game centers, game corners, and arcades. They're based on recommendation by postcards sent in by viewers.

Eventually the producers decided to start to try selling GCCX under the branding Retro Gaming Master to other countries. In one of the episodes, they show the staff talking with foreign buyers.

At a New York convention they showed one of these packaged episodes. Eventually Kotaku.com picked up a limited run of the series, but it was plagued with criticisms for the format changes. Apparently the episodes were the edited DVD versions which cut out the non-gameplay corners. While Arino himself was subbed, the narrator and staff voices were dubbed over.

Unfortunately, the DVD Box releases don't contain the episodes as aired on TV. The corners are cut out. Sometimes certain corners are reedited and readded to the DVDs, like the Tamagee sections.

On Fuji TV ONE.