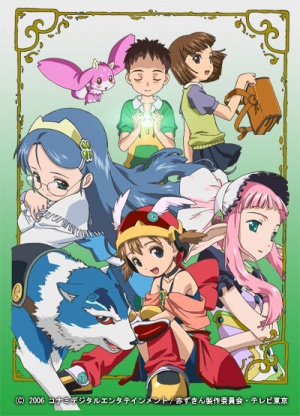 Started off in 2005 as an anime OVA that came with a figure that Konami was selling. (Supposedly there are three episodes of the OVA).

Otogi comes from the Japanese word for fairytales (otogibanashi). Juushi just means musketeers, a reference to the three musketeers. And Akazukin is the Japanese name for Red Riding Hood, it literally translates to "red hood".

Follows the adventure of a boy named Suzukaze Souta. As a child, he was told fairytales by his mother.

One day a man calls him the "Erde's Key" before transforming into a monster called a Nightmarian ナイトメアリアン. He's saved by a girl in a red helmet named Akazukin, one of the Three Musketeers of the Four Leaf Knights.

Based on Red Riding Hood. One of the Three Musketeers. 14 years old.

Japanese name for "Snow White". A magician in the Three Musketeers. 14 years old.

The original voice actress had to leave due to illness.

Erde - Earth where Souta is from. Name comes from the German word for "Earth". The world built on science.

Fandavele ファンダヴェーレ - The land where the fairy tale characters live. Their world is based on magic.

An OVA released with an Akazukin figure by Konami in 2005. Was originally going to be a three part OVA before it was scrapped and turned into the TV series. There are obvious merchandise differences, particularly with Akazukin's gear.

Page about the OVA