Ultraman is a 2004 film acting as a prequel to Ultraman Nexus, and part of the Ultra N Project. It is also commonly referred to as Ultraman: The Next, the name it was given during production, to distinguish itself from other films also bearing the same name. The name was shortened at some point during the production cycle to just Ultraman. The name Ultraman: The Next was bought back for the manga version of the movie.

First Lieutenant Maki Shunichi of the Japan Air Self-Defense Force is a distinguished F-15 Eagle pilot. It has been his dream of flying since young, but he ultimately decided to give up his career to spend more time with his wife, and his child who has a possibly terminal blood illness, and take up a less intensive career as a tour guide.

However, Maki would soon realize that all was not as he had planned. On his final day as a fighter pilot, he and a flight partner were alerted to a strange red light streaking towards Japan, and went to investigate it. With flight meters gone haywire just as they were reaching the site, his partner had to pull back and return to base. Maki then crashed into the red ball of light, and saw visions of a strange glowing giant.

An organization that Sara is a part of.

One of their facilities is the Iou Island Lab where they took Udou, after his extraterrestrial encounter. 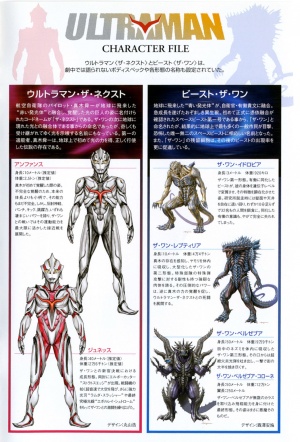 Ultraman and The One

Codenamed The Next, it first came to Earth in pursuit of The One, as a red ball of light. It can temporarily fuse itself with a human being, laying dormant in them and transforming into its true form when required. Ultraman first appears very weak, but evolves and becomes stronger the more his human host accepts him.

His codename is sarcastically created on the spot by Sara, after Shunichi accusingly asks her what his codename will be, since Udou's is The One. His name start with an N, since it's part of the Project N trinity of Ultraman Nexus, Ultraman Next, and Ultraman Noa. In the movie itself, Ultraman gets the name "Ultraman" from the children who saw him fighting in Shinjuku.

Codenamed The One, it is an evil powerful being which comes from space. It first appears as a blue ball of light, and has the ability to possess human beings. After possessing one, it can absorb animals and gain their abilities. For example, when it absorbs lizards, it gains the ability to climb walls and ceilings with ease.

The One has multiple forms, depending on what animals he absorbs. The DVD booklet includes the names of these forms.