A character on Tokumei Sentai Go-Busters

Possibly the most flawed of the Buddyroids, aligning with Jin Masato's philosophy that flaws are necessary to make things interesting. J will stand in front of Jin, talk over his lines, and basically ignore Jin's commands to please his own ego. This also makes him one of the most human of the Buddyroids. It's fitting that someone as egotistical as Jin would seek an equal who has the same personality traits and flaws as himself.

J basically has an ore personality. He says outright that he is only interested in himself. He fills his lines with the word "ore/I" to the point that it really stands out. One example of this is when he says "Activating my Marker System" instead of just saying "Activating the Marker System."

Besides the ego, J has a really playful personality. In scenes with Jin, J will often be seen goofing off in the background. He fights a snake playground set at one point (and loses). In another episodes, they fight a cotton candy machine enemy of the week, so J tells him to hand over the cotton candy which is made from Enetron. After the battle, J eats the cotton candy and says it's good.

Beet is short for Beetle and Stag is a type of beetle. In his normal form, J has both a kabuto horn and stag beetle horns. His overall suit is both gold and silver on top of black. Like Nick, he body is mostly humanoid.

The other Buddyroid's names are partially from their partner's name and from the food their animal eats. The Japanese wiki lists j as being jueki/sap 樹液, but perhaps it's also a reference to J for Jin.

One of the things that Jin is always telling J is to not cover him. The word for "to cover up" is kaburu 被る which literally means "to wear, to put on" and J is literally wearing Jin's Beet Buster suit. Also, kaburu sounds a lot like kabuto, which is the kind of beetle that Beet Buster is. Unfortunately, the base word and kanji for kaburu and kabuto are different, so this may be more coincidence than wordplay. 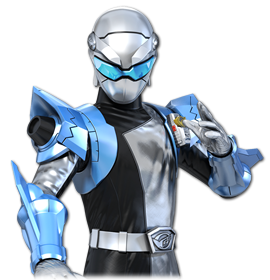 When transforming with Jin, J's exterior parts disappear and reappear as Jin's Beet Buster suit. At the end, the head pieces manually transfer over. Interestingly enough, J's whole mask becomes a part of Jin's helmet, even the stag horns. There's a set of secondary stag horns under his mask. When the glasses pop onto J's face, the viewer can see there is no human underneath, just blackness.

When he poses, his right hand is lifted up to form a J shape.

Weapon: Driveblade ドライブレード Official toy spells it Driblade Word is a portmanteau of "drive" and "blade". This is difficult to represent since the bu in Doraibu and Bureido are shared, but in English one is a v and the other is a b sound. If we went with Driblade, the "ve" part that should also be presented would be gone, so we represent both syllables to avoid confusion, even though there is one one sound in the pronunciation.

Finisher: When J and Jin pull the trigger of their transformation device, the device says "Boost up for Buster". They yell "Come on!" into the device to activate the next step. When pressing a button on the Driveblade, it says "It's time for Stag Attack !". J then performs a slash attack, which can be combined with Jin's Beet Attack.