Definition: Area of the leg between the bottom of the skirt and the top of knee-high stockings. 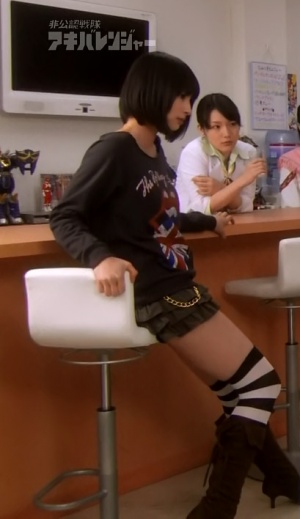 The exposed leg area is the "absolute territory/zettai ryouiki"

Here, Mitsuki shows the perfect example of "Absolute Territory" (zettai ryouiki). The idea that this is a turn on is because the less you can see actually leaves more for the imagination to work its magic - in another words it's a big tease and that's why people like it. Or in another way of thinking about it it's like cleavage of the legs - you aren't actually seeing anything indecent per se, but doesn't mean people don't like to take a peak and picture what the rest of the "goods" are like. -Nanaholic

Margaret's song Philistine includes a line "Thigh-high socks are my absolute territory Go on and drool; the Otaku cannot resist". She's a boss who dresses as a goth loli. Youtube link

Mentioned in AkibaRangers. It's also a known term in otaku culture.

Page of Japanese terms that appear in the shows