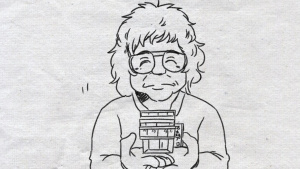 Name can be romanized Shoutarou, but official material seems to drop the "u".

A Japanese manga artist who became an influential figure in manga, anime, and tokusatsu, creating several immensely popular long-running series such as Cyborg 009 and Himitsu Sentai GoRanger, what would go on to become part of the Super Sentai series, and the Kamen Rider Series.

Shotaro Ishinomori was an original creator of all Kamen Rider Series, as well as Himitsu Sentai GoRanger and J.A.K.Q. Dengekitai.