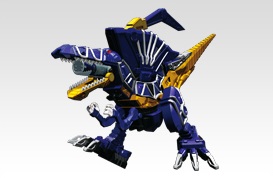 Name comes from Tobasu (To hurl, To skip over) and Spinosaurus.

Deathryuuger calls her the Legendary Descendent since she's the descendent of the Priestess whose song originally put Tobaspino to sleep. Meeko/Mikoto are both puns on the Japanese word Miko which means Priestess.

Apparently she's friends with Daigo. She calls him Dai-kun instead of King. In the flashbacks, they appear to be in France.

Daigo gives her a necklace which she refers to as her treasure. It's red and shaped like a triangle and has a fang on it. It's symbolic of both their goals to accomplish their dreams. Mikoto wants to be a singer and Daigo wants to be a strong man who has followed the Dinosaur's Path.

The first Chevalier, created in response to the ZyuDenRyuu. He drove Tobaspino mad and together, they helped drive the dinosaurs to extinction. Eventually D is killed by Tobaspino when a human priestess' song restores Tobaspino's sanity.

In Japanese, Ferocity is Doumou, which is another word that begins with D.

The way it's written, it could also mean D no Girls which is D's Girls in Japanese.

Has of saying "I'm enchanted".