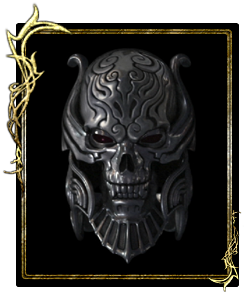 Zaruba from Garo ~Red Requirem~ to ~Soukoku no Maryuu~

Named after the old Makai word for "friend".

The full extent of Zaruba's abilities and knowledge is unknown; throughout the series he's able to help dispel confusion, detect various spiritual energies, summon the Garo Ken, speak on behalf of the dead, temporary flight, breathe Madou Fire (in Guren Forest), detect Horrors, create parts of himself into a ring to acts as an transceiver, see through illusions, converse with Kouga telepathically and act as a temporary storage for miniature items.

From Garo ~Red Requiem~ to ~Soukoku no Maryuu~, his eye color was changed to dark red from its original black.

A Madou Ring created by Makai Priest Amon and originally owned by Saejima Taiga, who previously inherited the title of Garo.

After Taiga was killed, Kouga inherited his father's ring. In contrast to both Taiga and Kouga's more deadpan and silent personalities, Zaruba is very talkative and cheeky, and does not hesitate to make fun of his master as well as those nearby.

He helped trained Kouga who was still a young child since Taiga's death, advised him on a variety of matters and even taught Kouga how to play Poker. His aid is not limited to Makai Knights—Kaoru once used Zaruba to guide her through the Guren Forest back to the human world.

During Garo's final fight against Kiba, Kouga could not summon his armor due to a magic seal placed by Kiba. Zaruba told Kouga to throw him into the dimensional rift in an attempt to bring him his armor. After a long exaggerated battle with Kiba, Kouga tried to summon Garo again and this time Kouga's armor was brought out by cherubs to help him gear up, signifying that this was a different, more powerful summon of the armor.

The armor was slightly different this time, and included a cape unlike previous transformations. Zaruba apparently used all of his energy to merge the power of all the past Garo knights into the armor temporarily and bring it to Kouga, and after his victory, he was too weak to hold onto his form and disintegrated.

Before parting ways, Rei gave Kouga a re-forged Zaruba as a token of appreciation from the Western Watchdog, though he retained his old personality, he did not have any of his previous memories before being reforged and he didn't like his name.

Zaruba ends up in the possession of the new Garo, Dougai Ryuuga. But having been around for generations by this time, Zaruba laments that undependable knights are everywhere now and deems Ryuuga too immature to worth speaking to. It is only once handed over to Burai that Zaruba speaks his mind and watches events unfold behind the scenes instead.