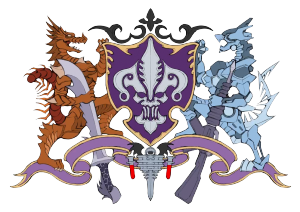 The main antagonist of the series, Kaizoku Sentai Gokaiger.

The evil empire that rules the whole universe. Their first attack on Earth was known as the Great Legend War. The attack on Earth in the Gokaiger series is actually the second, smaller fleet. At the head of this attack is the mothership, Gigant Horse, headed by the son of the emperor, Waruzu Giru. After his death, his father, the emperor assumed command of the second invasion.

The emperor of the space empire Zangyack who wants to rule the universe. He's perfect at swordsmanship, he has ability is to double fireball made at his shoulders.
Voiced by Ogawa Shinji
Appeared: Eps. 41-51

Etymology: Based on the words Aku Do Sugiru (Way too much evil).

The commander of the fleet. Played off as the spoiled, ineffectual son of the emperor. He sees the Earth campaign as a chance to prove himself.
Voiced by Nojima Hirofumi
Appeared: Eps. 1-38

Etymology: Based on the words Waru Sugiru (Way too much evil).

Chief-of-staff. The most competent, strongest member of the staff, thus he doesn't do anything or directly even appear before the Gokaigers until his last few episodes.
Voiced by Ishii Kouji
Appeared: Eps. 1-43

Technical officer in charge of development. The mad scientist of the group, she creates the gun that makes the monster grow.
Voiced by Inoue Kikuko
Appeared: Eps. 1-49

Etymology: Could be based on Insan (Sadness and Gloom) or Insane since she's a mad scientist.

The leader of the Imperial Guard, a fearsome swordsman.
Voiced by Nakamura Yuuichi
Appeared: Eps. 11-12

One of the emperor's bodyguard. Dairandou loves to have fun and treats his fights like a game. He often spurts out English words in his dialogue and uses the catchphrase, "Choi!" (ちょい) in his sentences. He has a weapon called the Big Hammer.
Voiced by Ebara Masashi
Appeared: Eps. 41-51, Gokaiger VS Gavan

One of the emperor's bodyguard. Zatsurigu has the ability to access telekinetic powers with the eye on his chest. He is also known among many in the Zangyack's ranks as the "Destroyer of Worlds" (惑星の破壊神) due to the full extent of his powers allowing him to wipe out hundreds of planets that refused to submit to the empire.
Voiced by Touchi Hiroki
Appeared: Ep. 41

A Zangyack scientist who is responsible for Sid Bamick's conversion into Barizorg.
Voiced by Nakata Jouji

The warden of Zangyack's prison in the otherworldly dimension known as Makuu Space. Ashuraada is also the heir to the legacy of Don Horror, thus baring a grudge on Gavan for his predecessor's demise.
Voiced by Sano Shirou. He also portrays the Space Police Superintendent Weevil.

Etymology: Based on Asura, Hindu deities.

The robot warrior which replicated all of Gavan's abilities, using the combined technologies of the Zangyack and the Space Police.

The monsters of the week. The action commanders are the alien monsters who serves under Zangyack to commence the operation. Some Action Commanders are related to villains from the previous antagonist groups that the past 34 Super Sentai groups fought, while some of them are successors to the defeated villains. Most of the Action Commanders were ordinary aliens who possessed special talents that were further enhanced by Insaan's modifications.

The soldiers. Apparently named after the Japanese word for garbage, gomi. In the first episode, a group of them are tossed into a dump truck by the Gokaigers.

Etymology: A combination of Gomi (Garbage) and Min (People). They're thrown away in a garbage truck in the first episode.

A step up from the Goumin. Their official rank is "non-commissioned officer". The giant versions can transform into vehicles.

Etymology: Combines Sugoi (Awesome) with the rest of the Goumin name.

The elite guards for the emperor. Red in color like the Emperor's elite guard from Star Wars.

Etymology The "do" here creates emphasis, like when Marvelous says "dohade" instead of just "hade".

The following 51 files are in this category, out of 51 total.