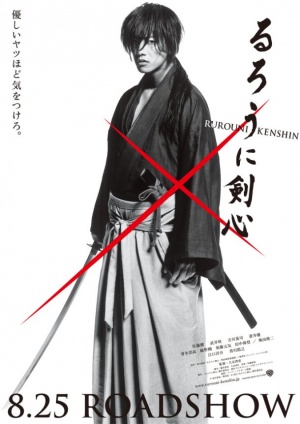 A Japanese film adaptation of Rurouni Kenshin based on the popular manga of the same name. Originally created by Watsuki Nobuhiro (和月伸宏) and directed by Otomo Keishi (大友啓史).

Two sequel movies are expected to come out:

Meiji period 明治時代 - The era when Japan moved from an isolated feudal society to a more westernized one.

Isshin-shishi 維新志士 - Means "Restoration" and "men of high purpose". This is the group the Kenshin worked for during the Bakumatsu. For the most part, they worked to usher in the Restoration, putting in place the Meiji emperor and ushering in the Meiji era.

Shinsengumi 新選組 - The "newly selected force" were the special police of the late shogunate period. That put Hajime at odds with Kenshin and explains why he has a pseudonym as a police officer during the Meiji era.

The school where Kaou is the assistant instructor. Their philosophy is "A sword that gives life." Currently its only student is Yahiko, since most people abandoned it after Jine started murdering while saying he was using the Kamiya Kasshin-ryuu style.

Name roughly translates to "The sacred sword in flight through the sky/heaven".

An ancient sword style that focuses on dispelling large groups of people quickly.

Battou jutsu 抜刀術 - This is a technique that turns the movement of unsheathing the sword into a deadly strike. Kenshin's specialty in this is what earned him the title Hitokiri Battousai.

Souryuusen双龍閃 (Twin Dragon Flash) - This attack involves drawing the sword to strike, then using the sheathe as a secondary weapon on the opponent, hence the twin dragons in the name. In the movie Kenshin says the full name Hiten Mitsurugi-ryuu Battoujutsu Souryuusen.

Haishatou 背車刀 (Back wheel sword) - Jine's technique of putting the sword behind his back, so his opponent can't tell from which direction he'll swing from.

Shin no ippou 心の一方 (One-sided heart) - Sending out chi from the eye to freeze one's opponent.