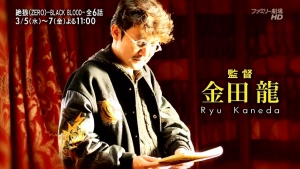 A Japanese director from Okayama, Japan. He studied movies at Tama Art University.

He's worked as a director in the video game industry.

He met Amemiya Keita in 1989 at the Tokyo National Fantastic Movie Festival, eventually becoming friends. Around the time when he was working on Denei Shoujo he and Amemiya started collaborating on the TV series Garo.

His catchphrase for when he's satisfied with a cut is "Sou iu koto!" or "That's it!"