The Akumaizers fight to gain the Zevar (ゼーバー) which is the MacGuffin of the movie. If they get it, they'll destroy humanity, thus getting revenge upon them for trapping their species underground for thousands of years. The Kamen Riders must team up to stop them, in a battle spanning time and space.

The first part. Five years later, Gentarou is now a teacher at Amanogawa High School as well as the Space Kamen Rider Club's new academic advisor. The rest of the original Kamen Rider Club members went their separate ways. However, a new school club called the Kaijin Alliance, comprised by a group of psychic children led by Kazeta Saburou who becomes a mutant known as Sanagiman, threatens the school. The Kaijin Alliance, in turn, is supported by a mysterious man named Banba Kageto who possesses a Zodiarts Switch.

The second part where Haruto enters the Underworld of an unknown Gate to investigate the mysterious occurrings of monster appearances. He then runs into a young woman named Kamimura Yuu who can become Bishoujo Kamen Poitrine and can use magic like him.

The third and final part. The three Akumaizer from the Underworld to plan to invade the land of the living by using a Kaijin Army. Wizard and Fourze, along with the help of Meteor, Nadeshiko, OOO, Birth, W, and Accel, must fight to stop the Akumaizer and their Kaijin Army.

Played by Adachi Rika (足立梨花)
Nickname is Miyoppe (ミヨッペ).
Gentarou's student and the only member of the Space Kamen Rider Club.
Based on the character Miyoppe from the Inazuman manga.

Played by Suga Kenta (須賀健太)
As a child: Shibuya Itsuki (渋谷樹生)
Leader of the Kaijin Alliance. Considers himself and his brethren to be the New Humans.
Based on Kazeta Saburou (風田 サブロウ) from Inazuman. 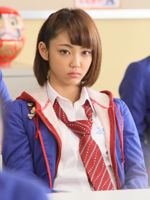 Played by Nakazawa Kazuyoshi (中澤兼利)
As a child: Sakamoto Taiga (坂本大河)
Another member of the alliance. His nickname is Kong (コング). He's got a giant body and is relatively mute except for the "Uho!" that he roars out.
Based on Kong-daiou from Inazuman.

The main antagonists who are the last remnants of the Akuma Race (アクマ族) from the Demon World (魔界). Their weapons are called Janekel, which are the weapons of the Akuma Race.
It is an homage to the TV series Akumaizer 3. Akuma means "demons".

They have a joint attack called the Akumajin Attack (悪魔陣アタック) Demon Position Attack.

Voiced by Demon Kakka (デーモン閣下)
The leader of the Akumaizer who is able to use the magic of the Underworld and wields the Jankel called Xalard (ザラード). He has the ability to control human minds easily. He plans on taking over the world together with his subordinates Eel and Gahra. Using the Zeber, Xatan transforms the Akumaizer's armored car into a large flying warship known as the Zaiderbeck (ザイダベック).
Xatan is a homage to Xavitan

Voiced by Seki Tomokazu (関 智一)
The most agile and skilled fighter of the Akumaizer and wields the Jankel called Elard (イラード). He is skilled in aerial combat and is able to sprout bat-like wings. Eel also has the ability to pass through time. He speaks in ancient Japanese.
Eel is a homage to Evil

Voiced by Mitsuya Yuuji (三ツ矢 雄二)
The strongest of the Akumaizer and wields the Jankel called Galard (ガラード). He has a habit of adding dana or nandana to the end of his sentences.
Gaara can transform into a large monstrous bird-like form known as the Gaaraccho (ガーラッチョ) which is just a giant ostrich (Called dachou in Japanese)
Gaara is a homage to Gabura

Played by Iriki Mari (入来茉里)
Poitrine is French for breast.

Voiced by Suga Kenta (須賀健太)
Sanagi is Japanese for Pupa.

Inazuma is Japanese for Lightning.

The title of the theme song is taken from the surname of Ishinomori Shoutarou, which literally translates as "forest of rocks" (石ノ森).

Switch On!
Life is SHOW TIME

An extension of the movie with additional footages that are not shown in the theatrical cut.