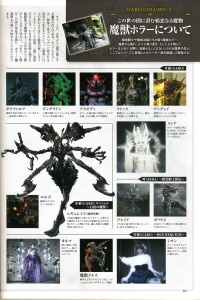 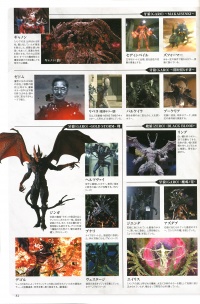 The primary antagonists for the Garo series.

Inga 陰我 - Literally "the dark side, the yin".

Makai - The underworld or the world of demons.

They're demon beasts from the world of the Makai. When a person with wickedness in their heart touches an Inga object, a Gate opens that allows the Horror to possess that person.

These Horrors then attack people in the night, devouring them as food.

Makai Knights can detect a person possessed by a Horror by shining a Madou flame in front of their eyes. If possessed, seals will appear in their eyes.

In this series, they introduce a new type of Horror. These new Horror are called Madou Horror or heretic Horrors. The old, familiar kind of Horrors that we know are relabeled Inga Horrors.

While Inga Horrors are created from weak-minded people and objects, Madou Horror are created by will from someone else. In the story, these people tend to be outstanding citizens and pillars of Volcity. Madou Horrors aren't revealed by Madou flames, making them harder to detect than Inga Horror.

When they fight, Madou Horrors use parts of themselves weapons. When Garo cuts them, gold particles fly out, briefly turning Garo's black armor into gold once more.