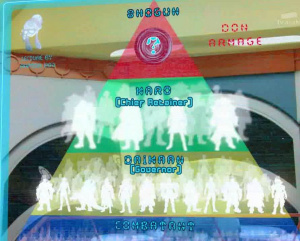 Hierarchy of the Jark Matter Shogunate

Is possibly named after Kukulkan, a Mayan snake deity.

Her design and name are probably derived from the Acámbaro figures, supposedly ancient figures that might have been depictions of dinosaurs. Akyanbaa herself has a triceratops looking design in her torso.

All Vice-shoguns have a gold statue shoulder piece.

There are 88 of these, each one controlling one of the Constellation Systems. Also known as Karo. Based on the Japanese word Karou (家老) (n) chief retainer, daimyo's minister.

Chief Retainer of the Sagittarius System

Chief Retainer of the Scorpius System

Chief Retainer of the Aries System

Chief Retainer of the Leo System

Cannon fodder. Design seems to be based on the famous grey aliens from 50s American culture. Their name itself is an anagram of Invader in Japanese (the b represents the v sound, since v doesn't occur naturally in Japanese).

Giant Indabee. Design based on the Flatwood Monster. Gets their name from adding tsuyoi/strong to Indabee's name. 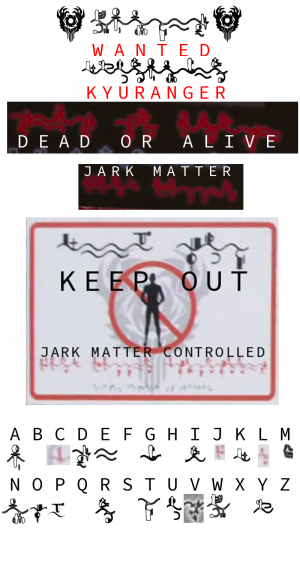 Alphabet as figured out by someone on TV Tropes

The Jark Matter's language is apparently a cipher version of the English language. Just like Jyuohger before where the language of JyuLand can be deciphered, the Jark Matter's text can also be translated into English fairly easily once the key is figured out.

The following 42 files are in this category, out of 42 total.