A fictional antagonist of the series, Kaizoku Sentai Gokaiger.

A former member of the Akaki Pirates who joins with the Zangyack and betrays his comrade, Captain Marvelous. His ultimate goal is to obtain the Greatest Treasure in the Universe.

Basco ta Jolokia is an overconfident privateer hired by the Space Empire Zangyack whose code of conduct is to discard something of lesser value to gain something more valuable, a means to an end to put it simply. Originally having a 3 million zagins bounty on his head, Basco was one of the most dangerous pirates in the cosmos. Assuming a human guise, Basco joined the Akaki Pirates under AkaRed. As the GokaiGalleon's cook, Basco befriended Marvelous, whom he affectionately calls "Marv-chan", as they gather the Ranger Keys before learning the truth behind AkaRed and his intentions for the Ranger Keys. Soon after, Basco betrays his comrades to the Zangyack in order to get the Ranger Keys and the Greatest Treasure for himself. Though he lost the GokaiTreanger Box to his former shipmate, Basco managed to get the Ranger Keys of Super Sentai's sixth members (such as DragonRanger or KibaRanger).

Arriving to the Earth on his ship the Free Joker after being contacted by Damarasu, Basco uses his Ranger Keys in a scheme to kidnap Captain Marvelous's crew, holding them at ransom to get the remaining Ranger Keys. But the plan backfires as Captain Marvelous and his crew are able to defeat and claim the sixth hero Ranger Keys. While hunting down Hyuuga in the Ginga Forest, Basco reveals that he also has the Ranger Keys of the Sentai teams' supporting warriors (such as Signalman, Zuuban, Rio, and Mele). He fails to acquire the Grand Power of the Gingaman and GoGo V teams, later losing his remaining Ranger Keys to the Gokaigers in his attempt to get the Grand Power of the OhRangers.

In retaliation, Basco reveals his true form that soundly defeats the Gokaigers while revealing that he already has the Grand Powers of the Changeman, Flashman, and Maskman. He lets the defeated Gokaigers live so that they can keep collecting the remaining Grand Powers, as he intends to take the powers for his own when the time comes. This action, however, forces Basco to help Damarasu wipe out the Gokaigers so he would be spared from execution for his indirect role in Warz Gil's death. However, having obtained the Grand Powers of Sun Vulcan and the Fiveman, Basco needs the Gokaigers alive to obtain the last remaining Grand Powers and the ones they already have. To that end, Basco sets up the illusion that he killed Joe, Ahim, Luka, and Gai. But once his part in their survival is revealed, Basco literally stabs Damarasu in the back with the intent of cutting his ties with the Zangyack while leaving the weakened officer to die at the Gokaigers' hands. Because of this treason, the Space Empire Zangyack reinstates the bounty on Basco's head while raising it to 10 million zagins.

Soon after, Basco feeds the Gokaigers information they need to rescue Space Sheriff Gavan as part of an attempt to lure them away from the Gokai Galleon. However, when he attempts to approach the ship, he is intercepted by the Go-Busters. After a short battle, he sees that the opportunity is lost and withdraws. Shortly thereafter, after watching as the Gokaigers gain the Grand Power of the KakuRangers, Basco finally makes his move to take the Grand Powers from them as the Gokaigers intends to recover the five stolen powers. After losing his last Giant Lifeforms, he injures Sally on purpose so he could be taken in by the Gokaigers and steal the Ranger Keys. Even though Sally had a change of heart and joined Captain Marvelous' side, Basco reveals the bomb he planted on the monkey, killing his former sidekick while gravely injuring Captain Marvelous. After defeating the remaining Gokaigers, Basco takes their Ranger Keys and commandeers the GokaiGalleon. However, Basco still needs Navi as the robot parrot's perpetual energy will enable him to reach the treasure. After the other Gokaigers attempt to retake the ship, a wounded Captain Marvelous arrives to settle scores with Basco. Though he attempts to waver Captain Marvelous's conviction with the truth about AkaRed, Basco admits to being impressed that his former shipmate is still determined to the point of acknowledging him as they begin their final battle. The epic duel ends when GokaiRed pins them both down by stepping on Basco's foot and then stabbing their feet together, so the two can land death blows on each other at point-blank range. However, Captain Marvelous manages to survive due a fragment of the bomb which killed Sally blocking Basco's shot, Basco collapses and dissolves into a red mist.

Basco ta Jolokia's pet space monkey, carrying a pair of cymbals much like a cymbal-banging monkey toy. In addition to serving as a bodyguard and servant to Basco, Sally is able to open up a hatch on her belly to produce Giant Battle Pseudo-Lifeform.

Her name is based on the Japanese word for monkey/gorilla which is saru. 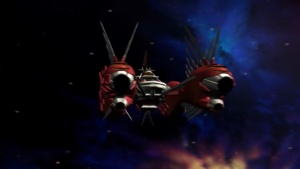